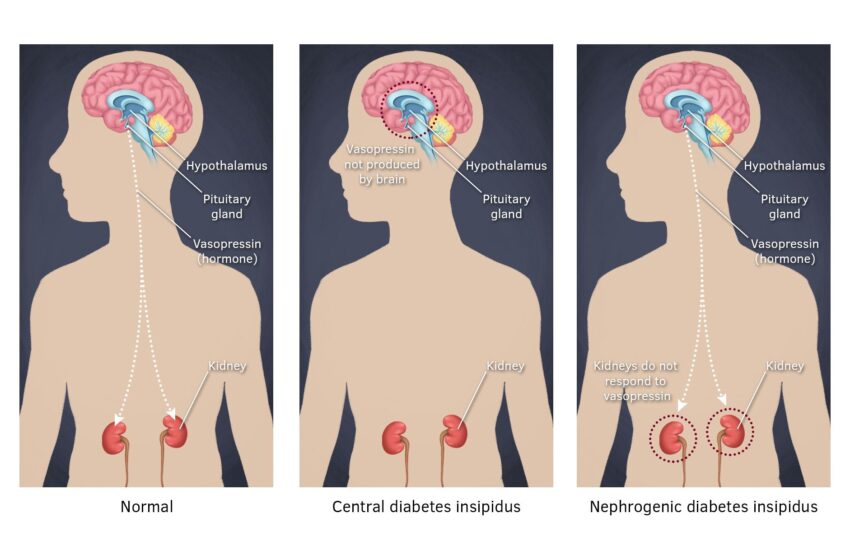 There is another lesser-known and less common diabetes, diabetes insipidus, characterized by heavy urination and increased thirst associated with ingesting large volumes of fluid.

The word ‘ diabetes’ comes from the Greek ( diabētēs ); it means “apparatus through which water passes” and describes diseases that occur with frequent urination. The best-known diabetes is diabetes mellitus  the Latin word Mellitus means “sweet as honey” -, named for the doctors of ancient times when they tested the patient’s urine to diagnose the disease; today, a test is done to determine glucose in the urine.

But there is another less known and less frequent diabetes, diabetes insipidus – insipidus, tasteless – which is characterized by profuse urination of very dilute urine.

The vasopressin acts on specific cells of the kidney (epithelial cells of collecting tubules), increasing the reabsorption of water, giving rise to urine concentration and dilution of the blood. This action is necessary for the maintenance of the balance of ions and water in the blood. Its secretion is regulated by the osmolarity of the plasma, that is, by the concentration of ions in the blood; in a healthy person, the two extreme situations would be: when the osmolarity is higher (more ions), vasopressin is secreted, and this acts on the renal tubules reabsorbing more water; When the osmolarity is lower (fewer ions, that is, the blood is more dilute), vasopressin is not secreted, water is not reabsorbed in the renal tubules, and it is eliminated in the urine.

Causes and types of diabetes insipidus

Depending on the causes that have originated the disease, two types of diabetes insipidus are distinguished: central, hypothalamic or neurohypophyseal, and nephrogenic. Let’s see in more detail what they are due to:

Sporadic forms: caused by any mechanism that prevents the release of vasopressin. If the injury includes the destruction of neurons in the hypothalamus, permanent diabetes insipidus occurs; but, sometimes, after trauma or surgical treatment, an inflammation of the pituitary gland occurs that is reversible cause diabetes insipidus may be transient. Possible causes can be tumors, head injuries, hypothalamic-pituitary surgery, granulomatosis (diseases in which granulomas form, which are inflammatory lesions that contain macrophages – a type of cell of the immune system- that appear in response to the presence in the body tissues of inert or biological particles that are difficult to eliminate. An example of granulomatosis or granulomatous disease is sarcoidosis ), infections, cerebrovascular diseases, and in some cases, the cause may be unknown (idiopathic) or autoimmune. Sporadic central diabetes insipidus can be associated with deficiencies in other pituitary hormones and sometimes with increased prolactin production (hyperprolactinemia), which is also a pituitary hormone.

As the name suggests, the cause is in the kidney. The situations in which the kidney does not respond to the action of vasopressin are: