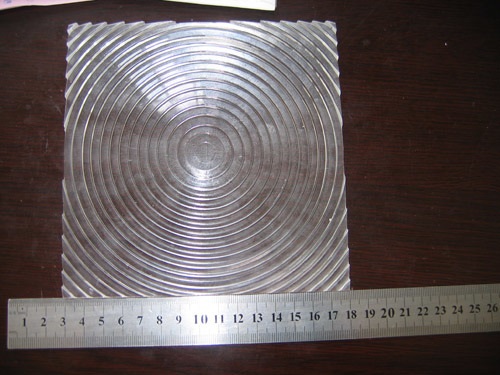 In 1748, the Earl of Buffon (George Louis Leclerc, 1707 – 1788), a French writer and naturalist, suggested that lenses could have their weight appreciably decreasing their spherical surface without decreasing their power.

The idea was put into practice by the French physicist Agustín Fresnel (1788-1827) who achieved it by lowering it with cuts of the lens in consecutive concentric circular rings.

It is a lens derived from a convex plane

Notice that if you remove the entire orange part of the lens from the bottom drawing it is practically reduced to a flat lens. Eventually the Fresnel lens sheet came up with it.

Actually what we achieve is a set of lenses working as a whole. These lightweight lenses (actually what you achieve are prisms) work like this:

This animation belongs to that page

Visit one page where the image above comes from and you will see other interesting photos of Fresnel lenses.Look at the cover of the overhead projectors, that glass sheet is also a Fresnel lens:

Currently they are modeled in plastic. When you look at a lens and see it formed by concentric circles it is surely a Fresnel lens.

The image quality given by these lenses is not very good due to the dispersion that occurs in the union of the rings in which the lens is divided, which gives light luminous rings in the plane of the image. But it is good enough for many applications. For years they have been the lenses of the spotlights with which films were shot in television studios. The use of the 3Dlens also came up with it.

Fresnel lenses are cut glass or also plastics manufactured in the same way whose mission is to make light rays behave when passing through them as when crossing flat convex lenses:

Light rays arriving parallel to the optical axis tend to focus on one point or focus.

The rays that come out of the focus go through the lens and come out parallel in a light tube, that is, collimated.

They are used as lenses that form poor quality images in two basic applications:

Situations where the diameters are so large that the lenses would be very heavy and expensive: in transparency projectors, or in headlights.

Situations where many different lenses are required in one place at a very low price. The simplest example is those devices that “ detect ” the presence of something moving, which are in some places and which are grayish semicircular plastics: inside they have manufactured enough Fresnel lenses to focus light from many different places in an internal detector.

If you look at a Fresnel lens what you see is a series of slits of circular shape (due to the symmetry) made on a glass or plastic material (cheaper). The study is complex and is based on issues of light diffraction when passing through this material manufactured in this way.

The idea of ​​a Fresnel lens is never to form a quality image, but to obtain a collimator-focuser system of light cheaply and inexpensively.