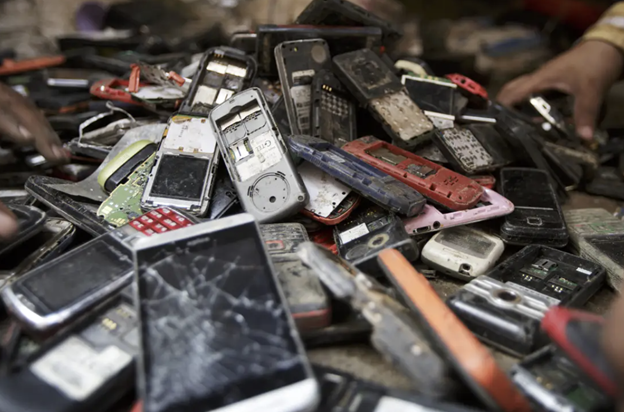 Our world is tech-hungry. Every year an estimated 1,000,000 phones and 275 millions laptops are manufactured around the world. We are creating alarming amounts of electronic waste. Most electronic manufacturers make phones and laptops that can be used for replacement, not longevity. 59million tons combined with other electronic waste like TVs and household devices, sends an alarming amount of electronics to the landfill every year. This is equivalent to 161 Empire State Buildings in weight. E-waste is expected to grow by 3-4 percent each year, making it one of the fastest growing waste streams .

E-waste recycling is a useful tool, but it cannot stop the majority of electronic devices from ending up at landfills. U.S. PIRG Right to Repair and Road to Zero Waste hosted a webinar where Niel, Co- founder at eCycle Florida, stated that it is impossible to recycle our way out from the e-waste crisis. The U.S. and other developed countries have been shipping their e-waste for reprocessing or recycling to developing nations for years.

The United States has been shipping large amounts of e-waste from the USA to China for many years. China had a high demand for resources and scrap. Low labor costs, and the fact that it was cheap to fill freights returning to China from U.S. shipments, known as backhauling, made processing costs affordable. However, the global trend in e-waste trade changed when China implemented its “National Sword” policy in 2018.

It is difficult to determine what happens to our electronic waste after we have thrown it away or recycled it. Basel Action Network, an international non-profit that tracks hazardous waste, placed trackers on 205 devices in 2016. 152 of these went to electronics recycling companies. 40%of all devices sent to U.S. recycling facilities were shipped offshore with the majority ending up in Asia. It’s difficult to determine exactly how much of our electronic waste is exported and where it ends up. However, it is highly probable that some older American gadgets ended in informal recycling areas in China like Guiyu. Guiyu is a good example of how dangerous, destructive, and environmentally harmful our global desire for new gadgets can be.

E-waste in China has grown exponentially due to both domestic production as well as foreign imports. China is the biggest producer of e waste and the top importer of electronic waste from all over the globe. 25% of China’s e-waste is recycled in the government-regulated formal sector. The remainder goes to cities such as Guiyu or Taizhou where informal recyclers extract materials from old devices for a small profit. However, the cost of extracting these resources can be very high, particularly in the informal sector.

Informal recycling is a process of recycling that is not controlled by the government. It’s usually small and family-run. Although informal recycling can increase the reuse of materials, particularly valuable metals in circuit boards, it can also have a negative effect on the environment due to the unreliable methods used to extract these valuable materials. Toxins are released into the atmosphere when recyclers burn plastics and metals. In order to separate precious metals like gold from other materials, informal recyclers may use hazardous chemicals such as nitric or hydrochloric Acid. These chemicals can also cause acid precipitation and lung damage.

E-waste recycling that is informal can not only be harmful to the environment but also to human health. In Guiyu in China, the hub for informal e-waste recycling, 81% of children have high levels of lead. The soil is infertile and has become a source for poisonous crops because of contamination with toxic metals such as cadmium and tin. To melt the plastic, it is necessary to burn electronic devices. This can release carcinogens like Cadmium Oxide, chromium, and Arsenic. These chemicals can cause lung cancer.

Electronics can be resource-intensive to produce and hazardous to dispose of. On paper, e waste is less than 2 percent the world’s total waste stream. It is responsible for over 70% of the hazardous and toxic environmental effects caused by waste streams.

Although e-waste is a serious problem, there are ways to address it. Although recycling electronics can be very helpful, it also has its limitations. Only a third of electronics in the U.S. can be recycled. Some materials, particularly plastics, are almost impossible to recycle .

It is best to avoid creating waste. We can do this by repairing, refurbishing, and reusing electronics. Reusing electronics rather than replacing them reduces waste and carbon emissions as well as rare-earth mining that is associated with the production of electronics.

The CLEAN future Act, which was recently introduced in Congress, would allocate federal funding for local recycling and reuse programs. To address the issue of electronic waste, however, additional legislation is required. Right to Repair policies were introduced in more than half the U.S. states. This would make electronic repair more accessible. This legislation would guarantee equal access to parts, manuals, diagnostic software, and tools necessary for fixing electronics. U.S. PIRG, along with iFixit, has been at the forefront of the Right to Repair fight for many years. We have helped to build a wide coalition of small-business owners, security and data privacy experts, as well as environmental advocates, who believe that we should all be able fix our stuff.

eCycle Florida sees thousands of gadgets every day. If manuals or parts are not available, it is impossible to refurbish them all. Niel stated that cannot achieve the scale our community and the world need without Right to Repair.

We all work together to improve e-waste policies, but you can also do your part at home. You can fix electronics instead of replacing them. Recycle electronics through take back programs and buy less gadgets. You should also contact your elected representatives to ask them to support Right to Repair as well as the CLEAN Future Act.